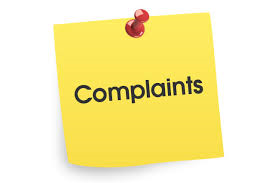 Policing is often carried out under difficult situations and most people will find dealing with the Police a stressful experience. If you think you have been treated unfairly by the police or the standard of service you received was unacceptable you can make a complaint.

You can complain if you:

If you are representing someone affected by any of the categories listed above, and wish to make a complaint on their behalf, you will need to have their written permission. This does not apply if you are the parent or guardian of a child aged 16 or under and wish to complain on their behalf.

Please note; you should only use this form to complain about the conduct of a police officer or a reserve police officer who works for the Royal Falkland Islands Police.

If you would like to make a complaint, click here to download the Complaints Form.
Completed complaints form can be returned to the Police Station in a sealed envelope and marked: “for the attention of the Inspector”, or by emailing a copy to: reception@police.gov.fk

What are the standards that a police officer should work to?

These are set out in the Police Ordinance 2000.

How long do I have to make a complaint?

A complaint may be considered too old if more than 12 months have passed between the relevant or latest incident leading to the complaint and the making of the complaint, and either:

injustice would be likely to be caused by the delay

A decision can be taken by the RFIP to not deal with such a complaint.

Injustice may be caused by a delay in making a complaint because – for example, it will be harder for people to remember the event and gather evidence.

Therefore it is important that complaints are made at the earliest opportunity to help the effectiveness of the investigation.

However, each case is considered on an individual basis and the RFIP will take into account the complainant’s reasons for the delay.

How will my complaint be dealt with?

In cases where officers have acted correctly we may explain their actions to help you understand them. This can be done without needing to use the complaints procedure.

If this is not possible, or your case is more serious, your complaint may be recorded, our aim is to put right anything that has gone wrong, to learn from experience and improve our service.  There are several ways a complaint can be dealt with depending on the circumstances and how serious it is:

In a process called ‘Local Resolution’ a course of actions are agreed between the complainant and the manager.

Formal complaint investigations are for cases where:

Such investigations will be dealt with by the Chief Police Officer.

This includes complaints about the policies, procedures, or services provided by a police force.

A complaint about the Chief Police Officer will need to be investigated by an independent investigator, appointed by His Excellency the Governor; this may also apply to general complaints about the police force.

If you do not agree with the outcome of your complaint then you may appeal to His Excellency the Governor.